A Lost Weekend (And not even in a hotel in Amsterdam) 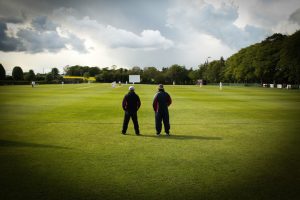 For a variety of reasons I was unable to attend at the cricketing activities in The Vineyard last weekend. However, I have beside me the scorecards from the matches on both Saturday and Sunday.  Saturday’s 5 run loss to Leinster CC was galling but excrement occurs.

It appears that, notwithstanding a fine century partnership between Joe Carroll and George Dockrell, The Hills were cruelly treated by Messrs Stern, Lewis and Duckworth. The target of 227 off 37 overs was a massive request to make on a day more suited to the oval ball game than to adventurous cricket.

Mind you, I don’t know an awful lot about the DLS system (hard sums have always been beyond me) but with the Leinster score of 221 after 50 overs, the target off 37 appears to be a tad unkind.

Interruptions for rain, pulling on and off of covers and the general disruption caused must make the batsman’s job even more difficult. Reports are that the wicket was, as usual, in good condition but the damp air and poor light can’t have helped.

120 for 3 in the twenty fourth over was respectable scoring, given that it was well ahead of the visitors mark at the same stage in their innings, Carroll was out in the 31st over with the score at 140.

Yes, it might be argued that a couple of lusty blows would have put The Hills ahead of the DLS par but Cormac McL-Gavin (27*) and Albert van der Merwe (47*) were scoring steadily always conscious that the loss of another wicket would put the target well out of reach, so they can be excused for their caution. Had either of them attempted heroics and been out cheaply they might have been subject to harsh interrogation. It was a no-win situation for the batsmen and they dealt with it as they saw fit.

Thirty six (36) wides in a total of forty one (41) extras may attract the attention of the bowling coaches. The difference between that figure and the opposition’s contribution to The Hills total was 27, admittedly off fewer overs but them’s the numbers.

Anyway, onwards and upwards, there’s a lot of cricket to be played by the First XI over the next five or six days; Clontarf away in the Alan Murray T20 Cup tonight, Phoenix at home in the same competition on Thursday evening, Phoenix away in the league on Saturday and on Sunday we welcome CIYMS from Belfast for the second round of The Irish Senior Cup.

“Bob Kerr” has had a year out of The Vineyard, it would be great if we could muster a good big congregation to encourage his return.

The Hills 2nd XI had a visit from Railway Union 2nd on Sunday and a gritty display, also rain affected, saw them achieve their second win on the trot.

Railway amassed a decent 203 for 7 off 40 overs with Nadeem Akhtar 3 for 47 being the leading wicket taker, Osama Khan chipped in with 2 more and Manu Kumar, Wasim Akhtar took one each.

There were numerous stoppages for rain which led to DLS deciding that the target for the home side was 189 in 33 overs. It was hard work but The Hills batsmen ground it out and a solid 39, not out, from Harry Archer together with fine contributions from Joe Clinton (28) Manu (27) Darryl Calder (23) and 19 from Osama, saw the Milverton men pass the post in the 33rd over.

Permanent link to this article: https://thehillscricketclub.ie/outside-the-rope/a-lost-weekend-and-not-even-in-a-hotel-in-amsterdam/