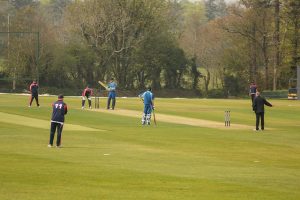 The lads from Stormont will be offering up prayers, lighting candles, and making sacrifices on the altars of the cricket gods lest they be drawn against The Hills in next year’s edition of the Irish Senior Cup.

The day began badly, rain and mizzle sweeping over from the south, and it didn’t look as if the omens boded well for a game of cricket. However, umpires Marty Block and Gordon Black (Block and Tackle?) proved to be patient men and they were prepared to give the ground every chance to dry up sufficiently for a shortened match to begin. So, instead of a 12.30 start the teams took to the field at 15.40 for a 35 over match.

The first note of ill luck for the visitors sounded when their hosts won the toss and, having had a look at the sky and the scudding of the clouds, Tomas Rooney-Murphy put CSNI in to bat.

Max Sorensen and Naz Shoukat, as is now customary, opened the bowling and with only four balls bowled the visiting skipper, Andrew Cowden, was trudging back to the hut having nicked Max to Mark Donegan. Things settled a bit for the guests with Horwood (21) and Agnew (11) adding 34 before, in the seventh over, Albert van der Merwe persuaded Horwood to offer a catch to Hamid Shah who was diligent in patrolling the backward point area all through the innings. Just four balls later Naz claimed the first of four scalps when Agnew edged one to the gleeful Mark Donegan.

It was beginning to look ominous for CSNI and it didn’t get any better when, with his next ball, Naz sent the Civil Service pro, Amjad, back with a golden egg. Five overs and fourteen runs later Albert dismissed his namesake, J. van der Merwe (7) with a sharp runout. 49 for 5. Donabate man, Shane Getkate (18) and Beverland (29) carried things into the 22nd over when Luke Clinton trapped Getkate LBW.

Beverland teamed up with Graham McCarter (33) and the pair put on another 35 runs before Manu Kumar tricked Beverland into giving Mark Donegan a third victim. 110 for 7.

McCarter stayed for another three overs and 18 runs before becoming Naz’s 3rd and Mark Donegan’s 4th wicket and with that dismissal it was just about all up for the boys from Belfast City. Max Sorensen had to relinquish the death bowling due to what looked like a strain in this side and Hamid Shah was thrown the ball for his first competitive overs for The Hills. Costain (3) became Naz’s fourth victim, smartly caught by Albert who needed to stoop a long way to get a hand on the ball but when he did it stuck.

Hamid claimed his first wicket, tempting Adair to dance down the wicket to meet him only to be beaten by the spin and giving Mark Don his fifth dismissal. CSNI all out for 148 with two balls remaining.

A rapid turnaround, the umpires were conscious of the dying of the light, brought Mike Baumgart (68) and Manu (6) to the middle. Manu dutifully kept his end while his colleague collected half of his eventual total in the 11th over when Amjad forced Manu to place a pad in a position adjudged LBW. Cormac McLoughlin-Gavin didn’t get much chance to play himself in, he was fortunate to survive an appeal for a catch at point before, on the next ball he nicked Cowden to Adair behind the stumps.

Hamid Shah (35) partnered with Baumy for an important partnership of 68 and it appeared that this combo would see The Hills home, however a mix-up of yes’s and no’s led to Mike being run out. It was unfortunate for the Irish kiwi because he was batting fluently and with the kind of elan which has made him a favourite with the Milverton faithful through the years. Mike faced 78 balls and struck 8 fours and 1 six in his total of 68.

Onwards and upwards, next week it’s back to Leinster League fare as The Hills 1st XI travel to the Nullarbor Plain, oops that should be Park Avenue, for an encounter with Railway Union.

Permanent link to this article: http://thehillscricketclub.ie/outside-the-rope/a-very-civil-service/