Welcome To The Hills Ciara and Albert

Girls U13 and U15 Training Saturday 27th February

Everyone at The Hills would like to take this opportunity to wish Max Sorensen and Ciara Metcalfe all the very best in preparation for the T20 World Cup in India next month, Max jets off tomorrow and Ciara will follow next week . Ireland’s Men will play at least three matches in the tournament and have been drawn against Oman, Bangladesh and the Netherlands in the initial stages, while the Women’s side take on New Zealand, Sri Lanka, South Africa and Australia. Max has been with The Hills since 2007 and made his Ireland T20 debut versus Kenya in February 2012, taking the wickets of Rakep Patel and Alex Obanda to finish with figures of 2/17 in an Irish victory.  Ciara recently joined the Hills as player and coach to our two senior Womens teams having previously played for Malahide and Pembroke CC.  Ciara made her Irish international debut in June 1999. In 42 ODIs, she took 50 wickets at an average of 25.08, placing her behind only Isobel Joyce and Barbara McDonald in terms of wickets taken for Ireland. Although she retired form international cricket in 2011 she made a return in 2015 and so far all her appearances have been at T20 level.  Good Luck to you both THCC! 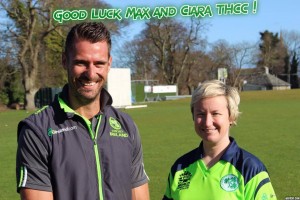 Permanent link to this article: https://thehillscricketclub.ie/good-luck-max-and-ciara/