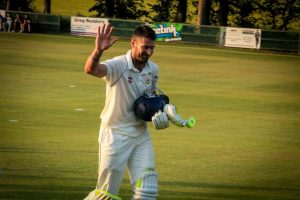 Is it Maxwell, Maximus, Maximillian? At last we know the answer to the oft asked question; Sorensen’s complete forename is Maximum.

The big man put behind him his recent gastrointestinal problems and his intercostal and abdominal tears and strains to provide the sun-drenched crowd at The Vineyard with a scintillating performance with ball and bat against the neighbours on Saturday last.

North County won the toss and elected to bat on a blinder of a wicket. That decision didn’t look too clever when the newly installed professional, Jordan Willoughby, fell victim to Sorensen, who had the Australian caught by Albert van der Merwe off the sixth ball of the match.

That was Max’s only wicket of the day but it set the standard for his bowling, 8 overs for thirty runs shows that not only can he fire them down at lightning pace but he can do so with commendable economy 3.75 per over from a seamer is not to be sniffed at.

The much-travelled Niall McGovern (50) was then joined in the middle by Adam Coughlan (24) and a decent partnership of 41 was forged. Coughlan was trapped “cos ar aghaidh” by Albie in the 13th over. 41 for 2.

Much is expected of the promising Jamie Grassi, who has already caught the eye of the Lightning selectors, but this was not to be his day to shine with the bat. The Hills skipper, Tomás Rooney Murphy, made him edge one to Mark Donegan, who gave a fine display behind the stumps. 46 for 3.

The ensuing pairing of McGovern with Eddie (Choo Choo) Richardson (33) made County’s best partnership of the day as these two put on 80 runs between them. A dangerous sequence for the home side was brought to an end when Nazeer Shoukat provided Donegan with his second scalp, the edge again. 126 for 4.

The total was starting to look a bit scary to many of the home supporters. Eddie was still there, big hitting Terry Richardson, Jonno Andrews and Nathan Rooney were circling above, waiting for the kill.

Jonno Andrews (25) and Eddie could only stick together for 2 overs, adding another 3 runs. The sigh of relief when Nazeer persuaded the umpire that Eddies pad had prevented him from hitting the sticks could be heard all around the ground.

It never gets easier against County; Nathan Rooney (61) and Jonno scored a joint 55 but were parted when Hamid Shah took a fine catch, diving forward, to dismiss the County captain off the bowling of Osama Khan.  184 for 6, ten overs to go.

The pressure was kept on The Hills as Terry Richardson (40) joined the fray, the big man opened his shoulders and punished the bowlers with a muscular display, his power and Nathan’s guile adding a further 56 runs before Rooney was caught by Manu Kumar off Albie’s spin. 240 for 7, in the 47th over.

Terry went on to dominate another little partnership of 24 with Andrew Sheridan (4) before he, too, was beguiled by Albie’s magic and caught by Mido to end a show of determination which looked as if it might be the straw to break the back of the proverbial camel. 264 for 8, in the 49th.Sheridan walked back to the pavilion one ball later as Albert struck yet again this time giving the catch to Tomás. 264 for 9.

The coup de grace came in the fiftieth over when Conor Shiel (7) was run out by Mike Baumgart leaving Ali (7*) stranded. North County all out 278.

If the North County innings had started badly then The Hills did their best to negative the advantage as soon as possible.  Mike Baumgart (4), opening with Manu Kumar (52) trudged back to the shed having faced just 3 balls, caught Sheridan, bowled Conor Shiel.

Mido Shah (41) and Manu built a partnership of 97, Manu batting strongly and fluently, striking 8 boundaries in his contribution. Mido rotated the strike sensibly until Eddie Richardson made him offer a catch which Willoughby eagerly snaffled. 101 for 2 in the 24th.  Folk were happy enough with the show so far but this was North County!

Manu departed in the next over LBW to Ali. Albert van der Merwe (13) and Cormac Mcl-Gavin (29) ploughed through three more overs until Adam Coughlan forced the umpire to raise his digit and inform Albie that his lower limb had obstructed the ball on its way to the wicket, (that’s LBW). 141 for 4 in the 28th.

Light the blue touch-paper and retire, so said the instructions on the squibs we used to sneak over the border in days of yore. Max Sorensen (102*) was on fire, someone had lit the aforementioned fuse. Cormo contributed 19 runs to a partnership of 84 and then fell to Conor Shiel caught by Nathan Rooney. 215 for 5 in the 43rd would there be time and sufficient overs to get to the finish line?

Mark Dwyer fell to Eddie without scoring and Tomás could only add three. 248 for 7, in the 46th.Nazeer arrived to the crease, you could feel the tension in Skerries, 31 runs were needed off 30 balls. Mr Shoukat was not found wanting, he weighed in with a vital 14 off 6 balls, including 2 big sixes. Meanwhile Maxie was dishing out the punishment to everyone who had the temerity to attempt to remove him from the wicket. His 102 included 9 sixes and 5 fours so he didn’t have to run too much on the hottest day of the year.

Maybe it was the weather, maybe Maxie was just in the zone but I reckon there was another reason for that coruscating spectacle; while The Hills were in the field the Outsider happened to be passing the ladies’ enclosure just as Max had suffered his second wardrobe malfunction of the day. Your intrepid correspondent was unwise enough to suggest that someone should offer the gentleman a length of elastic with which to suspend his trousers more firmly. The ladies treated this suggestion with distain, implying that they were quite happy with the status quo.

So the reason for Sorensen’s haste to reach the target without having to run too much was so that he could retire to the dressing room as soon as possible lest he be hoist in his own petard, as it were. (That means so that his trousers didn’t slip down and trip him up).

Three wins from four in the league, four teams on equal points, everything to play for.

Permanent link to this article: http://thehillscricketclub.ie/outside-the-rope/max-headroom/