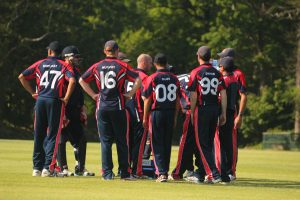 It was a huge weekend for The Hills 1st XI, a trip away to the rejuvenated Phoenix on Saturday followed by the visit of CIYMS to The Vineyard on Sunday.

The fact that at least five of their players were either carrying or recovering from injuries weighed heavily on the minds of the side. Phoenix, who were promoted from Division II with The Hills, have reinforced their battalions since the end of last season when they capitulated without a fight at The Vineyard. The arrival at the Park of Reinhardt Strydom and Alessandro Morris from Malahide and former The Hills favourite, Nicolaas Pretorius has injected some steel into a side which already boasted Sam Anderson who hit a fine century against the Milverton club last season. Add the Anders brothers and the evergreen Richie Lawrence and the ever improving Adam Chester and you have an outfit that should be comfortable in Division I this season.

Phoenix won the toss and decided to bat first. They opened with Strydom (40) and Pretorius (87) and The Hills, without the bowling of Max Sorensen struggled to break through. Albert van der Merwe eventually trapped Strydom LBW but, as so often happens when you’re down on your luck, The Hills found that they had jumped from frying pan to fire with the introduction of Masud Ahmed (62), he was bowled by Luke Clinton.

Nazeer Shoukat finally found the edge of Pretorius’ bat for Freddie Klokker to claim his first victim in Irish cricket. The Hills were relieved to see their erstwhile colleague leave the crease but with the third wicket falling with the Phoenix total at 210 there was still an awful lot of work to be done. Manu Kumar bowled Richie Lawrence for 23 but Adam Chester (82) arrived the task got harder still. Albie got his hands on the ball in the air off Hamid Shah’s bowling to send Chester back to the pavilion.

There wasn’t much left after that but Phoenix had amassed 340 for eight in the 50 overs. The Hills bowlers had shared the wickets with two each for Naz, Luke and Albert and one apiece for Mido and Manu.

The Hills reply didn’t start well; Freddie Klokker (8) and Manu (16) both caught behind of Rory Anders rattled the confidence and even Albert’s magnificent 109* wasn’t enough on its own to keep the innings afloat. A typically quickfire 20 from Max, 14 each from Mark Dwyer and Nazeer, 11 from Tomás Murphy and a few from Lukie made up The Hills 248 for 8 in fifty overs.

Deprived, by upper body strains, of the seam bowling of Max and Tomás The Hills were always going to be up against it but this defeat will be hard to swallow. However, onwards and upwards.

Sunday morning and the sun shone, The Vineyard shone and sparkled and the folks who came to support their teams stretched their limbs under a blanket of cerulean blue. A man from Belfast remarked (what the privileged already know) that the setting was the most perfect setting for cricket.

CIYMS, it is rumoured, have promised their galacticos treasure without price for success in Irish Senior Cup and if the stars continue to shine for them as they did against The Hills there’s every chance that the Belmont boys will be rewarded.

The Hills won the toss and asked the visitors to field first. Mike Baumgart (1), partially anaesthetised with analgesics for a groin strain, opened the batting with Freddie Klokker (15). Baumy faced only 8 balls before Johnny Thompson made him snick one to Chris Dougherty behind the stumps.

Freddie and Hamid (Mido) Shah (23) seemed to be settling in for a productive partnership but a careless shot gave Thompson his second victim, Freddie caught by Nigel Jones. Another combination, Albie (13) and Mido looked to be batting smoothly but the pace and accuracy of South African test player, Justin Kemp proved to be the downfall of Mido. 55 for 3.

Cormac McL-Gavin (37) came in only to see Albert depart after just one over as Jones got him to edge one to Dougherty. Enter Max Sorensen (29) (an off-season target for CIYMS) and the best partnership of the innings looked as if it might turn things around for The Hills but Max went after one that should have been left to its own devices, caught Dougherty, bowled Robinson. 108 for 5.

Mark Dwyer, who started the season batting freely and productively, joined Cormo but was trapped with his leg in front by Matchett for 12.

Tomás Rooney-Murphy (16) teamed up with Cormac and again we saw what proved to be another false dawn, Cormo caught Kemp off Matchett. 149 for 7 in the 43rd over.

A ripple of apprehension ran through the home supporters, “will we bat the overs?”

Nazeer (9) teamed up with his skipper but Murph was soon trudging back to the pavilion, LBW bowled J. Kemp. Manu came and went in the 45th over , he faced just two balls from the big Saffa and suffered the same fate as his skipper. So with five and a bit overs to play Luke Clinton (10) took his guard. The seamers stood up to all that Thompson and Co. dished out to them and with Luke being dropped off the final ball of the innings, The Hills did indeed bat out the overs. The Hills 193 for 9.

Matchett (8) and Dougherty (17) opened for CIYMS and with first Matchett falling to Nazeer, caught Klokker and then Dougherty skying one off Luke for Manu to snaffle The Hills supporters started to breathe a little more evenly.

What was it I said about false dawns? Nigel Jones (60) and Justin Kemp (58) were not in the mood to let the prize slip from their grasp. The New Zealander and the South African played cricket. Nothing unwise or flashy, they knew that they need to score at 4 per over and that’s just what they did.

A Belfast man told me that Jones wouldn’t be rash in his work but that Kemp might get bored; he did, after lofting Mido for a huge six over the sight screen at the pavilion end he assayed the same shot only to find the safe hands of The Hills skipper, Tomás whooped with joy as he ran to join his troops. 134 for 3 with 15 overs to go, it was just a tiny chink of light.

Two overs later, Jones went aerial off Manu, trying to lose the ball in the spuds in Joey’s field, and found the same fielder on the boundary. After some debate about whether the fielder’s foot was on the rope as he held the catch the batsman accepted his fate and walked back to the shed. 168 for 5, twenty five required off 32 balls.

Johnny Thompson (30*) went ballistic, 3 fours and 2 sixes in his drive for the line and brought his side home in the 47th over.

Much to be done, let’s hope for an improvement in the health of our casualties before next Saturday when the cousins from over the hill come to visit.

Saturday, June 4th, North County at The Vineyard. BE THERE!

Permanent link to this article: http://thehillscricketclub.ie/outside-the-rope/a-lost-weekend-ii-the-walking-wounded/